Wasn’t the weather at the beginning of April great – lovely and sunny, so once the other girls and their calves were moved to the hill, we were let out into the South field (on condition that we come in when we’re ready to calve)!!  It’s lovely being outside again and eating fresh grass, all that silage and hay through the winter is ok, but the fresh stuff tastes much better, I’ve got to say though, by the end of the month I really wanted to be back in the barn – have you ever seen such rain and mud, apparently in the first week of May we had 40% of the whole months average rainfall – a trifle damp you could say!!

Anyway, the other two Gloucester cows have had their calves, both girls; it was their first time so that was probably best for them – those bull calves can be a bit big for a first timer!   I’m still hanging on to my calf, I’ll probably calve sometime in late May, but in the meantime, I have that voracious appetite to take care of – well I am eating for two you know!!   So, I’ll just carry on eating grass and that nice bit of hay that keeps appearing in case we get bored with the fresh stuff. 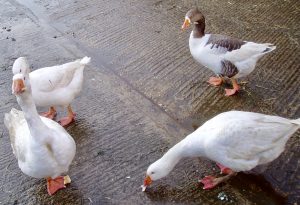 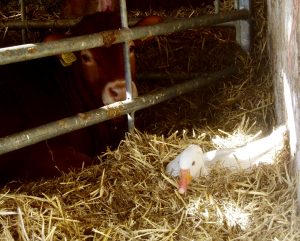 A Farmer friend of ours came around the other day and asked Jackie to put some fertile Rare Breed goose eggs under one of the geese that was nesting in the barn.   They’d only been there for a few nights when along came Monsieur Reynard (in Limousin!!) or Mr Fox to us English.  He took all of the eggs and poor old Mama Goose!!  This all happened in the middle of the day, which shows that people who think that foxes only hunt at night also probably believe that they are lovely fluffy creatures that only exist on the Basil Brush Show!!   Now I’m not a hunter (don’t think I could run that fast really) but I’m not terribly keen on those Fox chappies and I certainly won’t let them get anywhere near my calf once it’s born!  By the way, one thing you should know … it’s really difficult for us cows, with eyes on the sides of our heads, to distinguish between foxes and dogs, so can I remind you that if you are walking your dog through a field of us cows with our calves, please keep your dog under control but prepare to release the dog should we approach, we rarely bother chasing hoomans, but are very wary of those Fox-like things that you hoomanscall pet dogs!!

Finally, yesterday, I was chatting to the other girls, we were all amazed at how quickly the grass was being eaten (according to Jackie, we’re not really eating it, more likely treading it into the mud !)  and this made me recall what my mother once said to me …

“Some say that if you eat slowly you will eat less”.

Of course, as I have found to my cost …

this is particularly true if you are a member of a large herd!