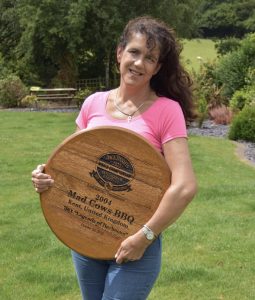 A little bit about me … Many years ago I worked in the City of London as an IT Operations Manager (having worked my way up from my first job in a typing pool).

In 2002, I left it all behind to run my Cattle Farm in Kent.  We farmed around 250 pedigree beef cattle, using some for meat, but the majority for breeding.  We also kept and bred rare breed Saddleback and Berkshire pigs.  Which is where my love of farm to fork started.  We made our own sausages, bacon, hams, pastrami and other cured and smoked delights, which we sold at local Farmers Markets.

In 2003 as a ‘big’ birthday gift, my late husband took me to Lynchburg, Tennessee to attend a BBQ School.  I’ve loved to cook since childhood and though somewhat apprehensive about this strange gift, I found this ‘new’ American way of barbequing really interesting and got hooked.

My late husband and I got into competition BBQ in the USA (it didn’t exist back then in the UK), I was the Chief Cook and he … well he sat around and drank beer whilst offering the odd ‘useful’ tip!  We competed in many competitions around the USA and also visited many places in the USA tasting Barbeque and meeting like-minded people.

In 2004 on our second invitation to cook at The Jack Daniels World Championship Invitational BBQ Competition we took the top prize and became The Grand Champions, we also took the International Grand Champion Prize too.  We were the first non-American Team to ever win this title.  This is still true today in its 30th year. The Jack is considered to be the ‘Superbowl’ of BBQ Competitions in the USA.  As the Chief Cook, I am also the only Woman ever to win this title so, it was a bit of a double whammy.

From this foray into barbecue, we set up a business importing barbeque and smoking equipment to the UK and formed The American BBQ Company.  We also set up a catering business using American style BBQ methods.

I stopped competing when my husband died and eventually passed on The American BBQ Company to new owners, but I kept the Restaurant Consultancy part of the business.  I have had in-depth involvement with many successful BBQ Restaurants and catering businesses.

I also run a BBQ Rub business along with a BBQ School both of which I run from my home in Kent.