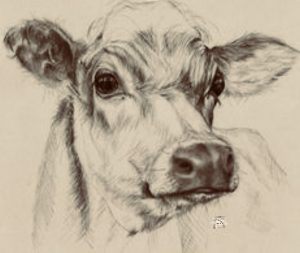 First of all, allow me to introduce myself … my name is Samantha and I was born at Woodcock Farm in Grafty Green, on 11th September 1995.  My mum’s name was Delilah, she moved here ten years ago, but sadly she passed away a few years ago at the ripe old age of 15.  I didn’t know my dad; he only came here to visit and left before I was born, but that doesn’t bother me!  Yes, you’ve guessed … I’m a cow!

I have had five calves so far; my last daughter Cleo, was born nearly a year ago and she still lives on the farm.  I’m due to have another calf in June, I’m hoping for a boy this time as my last two calves have been girls.

I live with a group of French ladies and gents with lovely red hair; they’re apparently called Limousin’s.  The language barrier was a bit difficult at first, but we’re all gradually learning to communicate (I think it’s called Esperanto), at least I have the three Gloucester cows to talk to.  Gloucester’s are a Rare Breed, apparently England’s oldest cattle, dating back to caveman times.  I suppose I’m sort of a Rare Breed myself, my dad was a British White (this is where I get my looks) and my mum was a Sussex (probably where my appetite comes from).  Cleo looks just like me which is interesting, since her dad was a Limousin, guess I’ve got stronger genes!!

Anyway, enough of me … next month I’ll tell you what’s been happening on the farm … some of my Limousin sisters have just been taken off to the maternity wing, so we should start having some youngsters running around soon.