Well, I’m still holding on!  May has passed and I’ve yet to produce a calf.  I’m getting really big now, Jackie reckons that I look like an over-inflated white barrage balloon on legs … what a cheek!!   Personally, I think I look rather cuddly.

It’s been interesting watching some of you hoomans waving at me as you walk past (although I do seem to be a very good excuse for those of you who run past, to stop and have a rest)!  I would try and wave back, but my legs don’t work that way – and I’d probably fall over!

The rest of the Limousin’s in the field with me are due to start calving towards the end of June, so there will be lots happening over the next couple of months – two of the girls are due to have twins and I know that Jackie is hoping that each set of twins will be of the same sex.  The reason behind this is that if you have one bull and one heifer, in 95% of cases, the heifer will not be properly formed internally and will not be able to have calves of her own  (these heifers are called ‘Freemartins’) – it’s a terrible shame and I don’t know why it happens that way, it just does.  So, fingers crossed.

I was having a little wander around the farm the other day and couldn’t help but notice some very good looking young Limousin Bulls in the North Field – they all appeared to be working out like budding Charles Atlas’s and it was definitely paying off!  Four of the Bulls are only just over a year old and definitely too young for me, but one Bull (who told me that his name was Tarcento) is two years old and a real likely looking lad who may need an older girl to show him the ropes (I would have volunteered but sadly I’m not in the right condition for that sort of thing yet)!! 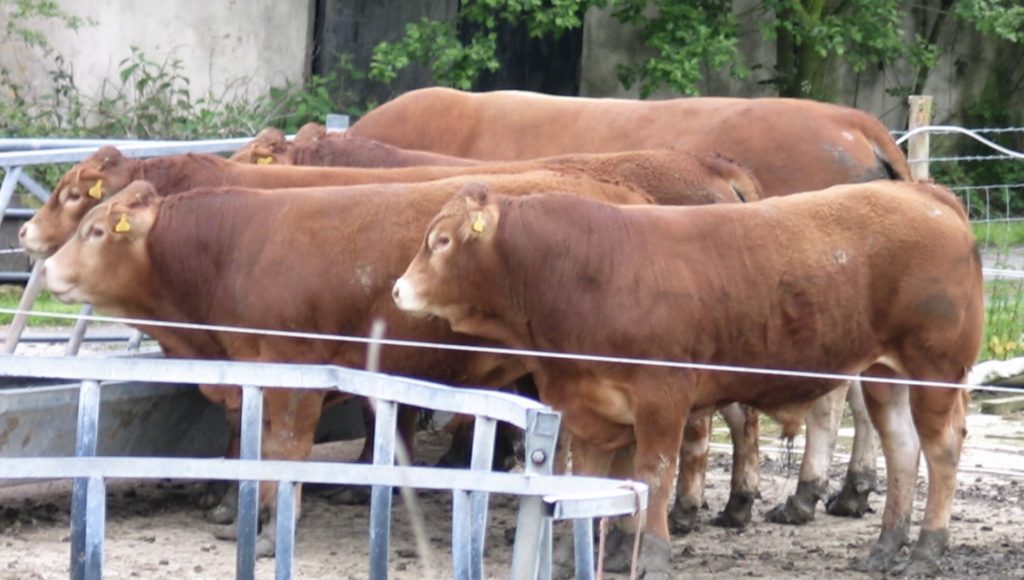 Over the May Bank Holiday weekend, Tarcento the Bull went off to the hill to join the other girls, some of whom calved earlier this year and some of whom are still heifers and new to ‘That’ sort of thing.  Well, I’m not sure if you realise this, but when us cows are talking we can be a bit loud and you should have heard the reaction from the girls on the hill when Tarcento moved in!!  Let’s just say, from what I could hear, even from this distance, they were VERY pleased to see him!

Finally, my thought for June ….. Yesterday, I was nibbling those lovely young shoots from the top of the hedge next to the Lane, when I overheard two of the local ‘runners’ talking.  They were having a debate on how one of them keeps waking up really early in the morning; it reminded me of what my mother once said …

“Just when you’re successful enough to sleep late, you’re so old you always wake up early!”