Wow … what a month June has been, I’ve got so much to tell you I’m not sure where to start!! 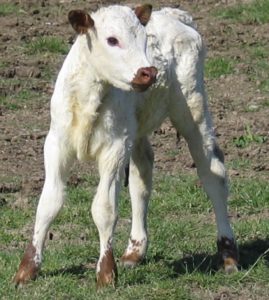 First of all, me … I woke up on the 28th June thinking that I had eaten too much – I had terrible indigestion, I soon realised  that it wasn’t indigestion at all when I gave birth to a bouncing baby heifer.  She weighed in at 58 kilos, which I must say made my eyes water a bit, but I delivered her all by myself at around 6 o’clock in the morning.  She looks just like me and we’ve decided to call her Jasmine because she’s so pretty (I know, I’m a vain old cow, but motherhood does that to you).   The good thing about having given birth is that I’ve now got more room in my tummy for food!! 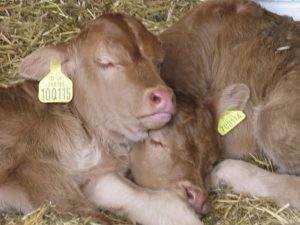 Regal gave birth to her twins on 17th June.  They were both bulls which made things even better!  Regal and her babies went into the barn for a few days, just to make sure that she could manage to feed them both and that everyone was ok, which I’m pleased to say it was.  Regal doesn’t have a great deal of milk to feed her two boys, but they have learnt very quickly that those nice Gloucester ladies have plenty to go around, so they steal milk from them when they think nobody’s looking – although I know that the Gloucester’s are happy to help out!

Naomi had a lovely little heifer calf on 23rd June, but as the calf couldn’t work out how to get the teat into her mouth to suckle her mum, they both came into the maternity ward – eventually, after four days of Jackie patiently putting each teat into the young calf’s mouth, four times a day to feed her, she finally worked it out.  The calf is not very good on her legs so she’s being very closely watched and may need the assistance of Uncle Duncan the Vet, in the near future.

Talking about Uncle Duncan, he had to come out to the farm again on 1st July when Rodiche had a prolapse.  Unfortunately, she had the problem after calving a lovely bull calf, in the furthest corner of the field and as Jackie couldn’t bring mother and calf in on her own, she enlisted the help of Shaun, our new Parish Councillor (well their duty is to support all members of the community and we don’t see why us cows should be left out, after all there’s more of us in the parish than you hoomans).  Jackie did warn him to wear overalls as things could get messy and I’m pleased to say he listened.  Jackie and Shaun got mother and baby into the barn just as Uncle Duncan arrived.  He did his usual magic and put Rodiche back together again.  It was a new and ‘interesting’ experience for Shaun and I’m sure he will never look at a wine bottle in the same way again!  (Don’t ask)!!

Young Shirondelle had a lovely bull calf on 4th July, it was her first calf and although she managed to push him out as far as his hips, it was all a bit too much for her and Jackie had to help with the final pull.  Mother and baby are both fine and I’m pleased to report that Shirondelle has taken to motherhood like a duck to water.

Ruby is now the only cow left to calve.  She is due to have twins and is looking very big and heavy – only yesterday I saw the outline of a hoof kicking out through her tummy.  She will probably have to come in soon, just to make sure that any complications can be dealt with quickly.

We are hoping to go to a new local field soon, as there is some nice grass waiting there for us – there isn’t much grass left at home and we are eating our way into the Winter feed already – that young farmer Tom does make some nice silage!

Finally, with all the youngsters we have running around at the moment, I suddenly remembered another one of those little trivialities that my mother once told me …

“By the time we realise our parents were right,

we have children who think we are wrong”!

Now that there is a break in the rain, I’m off to eat some more grass – especially as now I’m a nursing mother, I need to keep my strength up and the milk flowing! 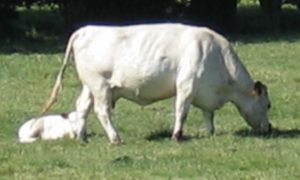