27th September 2018 Off By Jackie Weight

I made this as part of my audition to a well-known baking competition, I really liked the Pie and having made a few of them, thought it would be good to share the recipe. 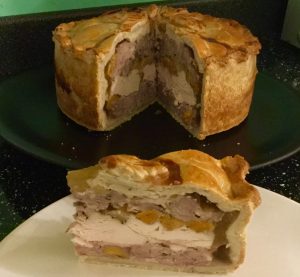 To make the pastry, place the water, cubed lard and butter together in a saucepan, bring to the boil and set aside whilst the fats melt.  Place the flour and salt into a large bowl, make a well in the centre and pour in the water and fat mixture.  Bring together to a smooth dough.  Divide one third of the pastry off and wrap in cling film.  Roll out the remaining dough into a large circle big enough to fully line a pre-greased 20cm spring form cake tin, leaving some pastry overlapping the top of the tin.

Roll out the remaining third of pastry and cover the whole pie with it, pushing it down at the edges to seal, trim off any excess pastry and then crimp the joint.  Brush with some of the beaten egg to glaze, make a 2cm hole in the centre of the lid and raise the edges a little.  This will allow the steam to escape and the raised edges will help to stop the liquid flooding the pastry top.  Decorate with leaves or a pattern of your choice.  I like to create a rose of pastry to fit in the hole at the top when the pie is finished, this should be baked separately.

Bake in a pre-heated oven set to 180C for 30 minutes then turn the temperature down to 140C and cook for a further 90 minutes, or until a food probe inserted through the hole in the centre and halfway into the meat reads above 75C.  Remove from the oven, turn the oven back up to 180C, allow the pie to stand for 10 minutes and remove from the cake tin.  Brush the sides of the pie with the remaining egg glaze and return to the oven for a further 15-20 minutes until the sides are golden brown.  If the lid is starting to over colour, place some foil over the top only.

While the pie is cooking, make the stock.  I like to make a proper stock from a pigs trotter, the trotter contains enough natural gelatine to make a really good jelly.  Place the trotter, cubed vegetables and water in a saucepan, bring to the boil and simmer for a couple of hours.  Strain the liquid, place back in the pan and bring to the boil again.  Boil until reduced by half, season with salt and pepper before leaving to cool.

Once the pie is golden brown, remove from the oven and leave to cool.  Once cold, pour the cooled stock into the pie through the hole in the top.  Do this slowly allowing the liquid to disperse before adding more, until the pie is full.  Chill again before serving.