Well it’s all been happening on the Farm this month. The ladies in the Maternity Wing have had their calves. The first one, Nirondelle, had a heifer calf on Mothers Day … very appropriate.

The second calf caused a bit of concern though, it was Sprite’s first calf and it was a little on the large side – a Bull calf – it needed a fair bit of help from Jackie to deliver it and get it breathing but all turned out OK. Unfortunately, five minutes later Sprite had a prolapse – it was pretty messy and Jackie had to call for Uncle Duncan (our Vet) he was here within 30 minutes (it’s like dialling 999 for Cows!!). Eventually, all was good, the prolapse was cleaned up and put back and Sprite was stitched together again. Mother and Baby are both doing well and are out in the field munching grass as if nothing ever happened!!

After that, everything went well, the other three cows (Nan, Roxanne and Nymph) all delivered their calves by themselves – Nymph as usual was last … she’s always the last to do anything … well she is the Boss Cow (at least She thinks she is!!) 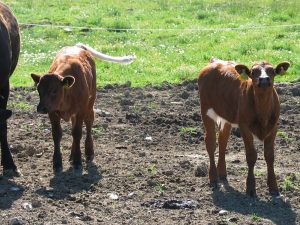 , who when she went for her Scan last November, was told that she was due to calve in the middle of May. She decided differently and produced a bouncing baby heifer (girl calf) on Good Friday, putting everything into disarray. Yana and her baby are now out in the field with the Limousin’s. I think they’re all going to be moving to the field at the top of Liverton Hill soon, to make way for the rest of us calving mothers at the Farm.

I’m going to be moving the Maternity wing soon, my calf is due anytime from now until the end of May, (can’t trust those scans anymore) I’ll let you know how it goes.

Finally, what most of you don’t realise is that us Bovines have lots of time to think (some may call it ruminating, or chewing the cud). We’re smart creatures you know, and I’m going to try and leave you with a different thought each month, based on something that one of the others has said. Yesterday, I was talking to Nymph and I mentioned that she was trimming up now that her calf had been born … she replied …

I’m hoping to whittle it soon.

But eating’s such fun,

I may not get done

Till my dish runs away with my spoon!!